In 2007, I worked for the Aaron’s Pro Women’s Cycling Team on the road, in conjunction with my job at the bike shop.  It was a hectic schedule;  I had a 6 month old child at the time, and a full-time job at  a very successful bike shop.  It only made sense to go on the road with a pro team, right?  In most situations, I’d fly in for a race, transport the vehicles to a temporary home, then fly back home.  The next week, I’d fly back to the vehicle and drive to the next race.  All my days off at the bike shop were working days for the team.  Let’s just say it was an interesting year…

The team director, Carmen D’Aluisio, was a very experienced cyclist during her racing career, and passed down a lot of wisdom to me throughout the year on the road.   One thing she also helped bring to the team was a pretty sweet sponsorship deal with Specialized Bicycles.   At the time, the girls were being equipped with S-Works bikes with SRAM Force (top-of-the-line, at the time) components.  The bikes were some of the lightest in the women’s peloton, and I’m sure some of them were below any legal limit being enforced by the UCI. 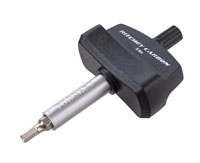 On the opening day of team training camp, Carmen handed me a tool and said, “Don’t lose this.”  It was the Ritchey TorqKey, a 5nm mini-torque wrench with a 4mm bit, that fit in the palm of my hand.  “All these parts have to be torqued to the proper specifications,” she said.  She was so adamant about torque on the S-Works bikes that she gave each one of the girls on the team their own TorqKey to use when they assemble their bikes after travel.  I was aware that torque was a big deal, but until that point, I hadn’t utilized a torque wrench very often.

Since that point, I’ve used the Ritchey TorqKey ALMOST EVERY DAY.  It’s a really small tool that fits easily in any toolbox/collection and is a necessity if you’re working on anything carbon.  I’m extremely excited about the Ritchey Torque Wrench (manufactured and licensed by Effetto Mariposa) that I just got in for review (via VeloReviews.com).  If it’s anything like the TorqKey, I’m sure it’s a tool that I won’t be able to live without.