My week at the Tour of Utah with Carmichael Training Systems was amazing, as expected.  We had four athletes and three coaches, so the workload was okay for just one mechanic (me) and one soigneur (Colleen).   Here’s a quick little day by day rundown of what happened:

The day before the start of the race, all the athletes and staff arrived, and we hit the ground running.  As the athletes each arrived from the airport, they brought their bikes to me in the hotel parking lot, where all the teams were set up.  I found a great spot next to some mechanic friends that work for Optum/KBS and got comfortable.  My workspace consisted of a folding table, my toolbox, a box of ProGold lubricants and supplies that we were given (Thanks, Bruce!), my Feedback Sports Pro-Elite repair stand, two a-frame bike racks, and a CTS E-Z Up tent.  That was really all I needed to get bikes built.  Later in the week, I would need water hookups to wash down the bikes and such, but for initial building and preparation, it wasn’t necessary.

After all the prep work was done for the first stage, we had a rider/staff meeting to introduce each other, discuss the details of the camp, and plan out the next day’s schedule.  It’s important to keep meetings like that kind of chill and to try and get to know the athletes a little better.  Developing trust with them is key.  They need to trust me to work on their bikes and support them throughout the week.  I try to learn the athletes’ little habits and nuances early in the game, so I can address them before a situation arises on the road.  By doing that, we can eliminate a lot of panic-stricken situations in the future. 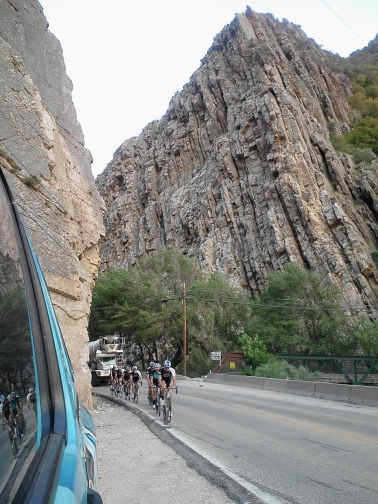 The logistics of this first day were kind of weird.  In order for us not to get caught by the pros, we had to cut off a little “lollipop” section of course near Henefer, UT.  We started out strong for about 200m… then the day’s first flat tire.  Because we hastily prepared and had supplies and staff coming from several different locations, we forgot to pack any spare wheels.  After installing a new tire and tube, the new tube was pinched by the tight bead of the tire.  Flat tire number two.  After changing that, we were on our way.

Less than 30 minutes later, as the riders were ascending through a tight canyon, just north of Ogden, we had a third flat on the road.  One rider picked up a piece of debris in a tire, causing him to develop a somewhat slow leak.  The object was removed from the tire, a new tube installed, and we were back on the road… again.  Luckily, this would be the last flat for quite some time.  We continued out of the canyon, and kept pedaling down the road.

After several rest stops and our turn around point on Hwy 65, we returned towards Ogden.  We had to stop near Interstate 84 and wait a few minutes because the pro race was coming through.  It gave us a good time to refuel, and the first chance for the CTS athletes to see the actual race in progress.  Afterwards, we continued back up towards Ogden, making a rest stop in Eden.  At the Eden rest stop, CTS coach Kirk Nordgren’s cousin was waiting with her kids and had homemade signs to cheer him on!  That was a really cool experience, primarily because it was in the middle of nowhere, and they were just hanging out waiting for us.

After the last KOM of the day, North Ogden Divide, CTS coach Colin Izzard’s carbon clincher wheels came apart on the descent.  He had been feeling pulsating during braking all day, but we couldn’t feel anything structurally upon inspection.  Less than 500m into the descent, he comes on the radio and said his wheels were toast.  Both his tires had punctured, and both his rims were victims of overheating and delamination.  Not cool.  He was very lucky to be able to control the bike without crashing, or worse.  Definitely a situation where spare wheels would have been nice to have.  We loaded he and his bike in the CTS truck and continued down the hill to finish with the group.

I had a bit of parts-switching to do after Stage 1.  Kirk (camp manager), offered his wheels to Colin (lead coach), so he could continue to ride with the CTS athletes.  Going from carbon rims to aluminum rims, this meant switching brake pads, wheels, and ensuring the gearing was proper for the rest of the week’s climbs.  After switching around the parts, the bikes were washed and tuned, before stowing them in my hotel room (because of lack of a team trailer at this event – the CTS trailer was at Leadville, CO, supporting the riders at the Leadville Trail 100).

We transferred from our hotel in Ogden, south of Salt Lake City to Miller Motorsports Park, near Tooele, UT.  The CTS athletes were getting the opportunity to get on course before the pros for the Team Time Trial stage of the Tour of Utah, which meant they were going to be riding their bikes on the world-class track, normally used for motorcycle and auto racing.  We were able to set up our pit area inside one of the garages at the facility, just like the pro teams did.  The guys took three laps on the track; one to warm up and get used to the track, a second “hot” lap, where they utilized time trial tactics, and after a quick clinic on the team time trial, a third cool-down lap.  The guys were stoked to be able to get on the course, and I was stoked to be able to follow them in the support vehicle.  I’m not going to lie… it was pretty rad to drive the truck on the track, even if I wasn’t pushing it as hard as I would have liked… 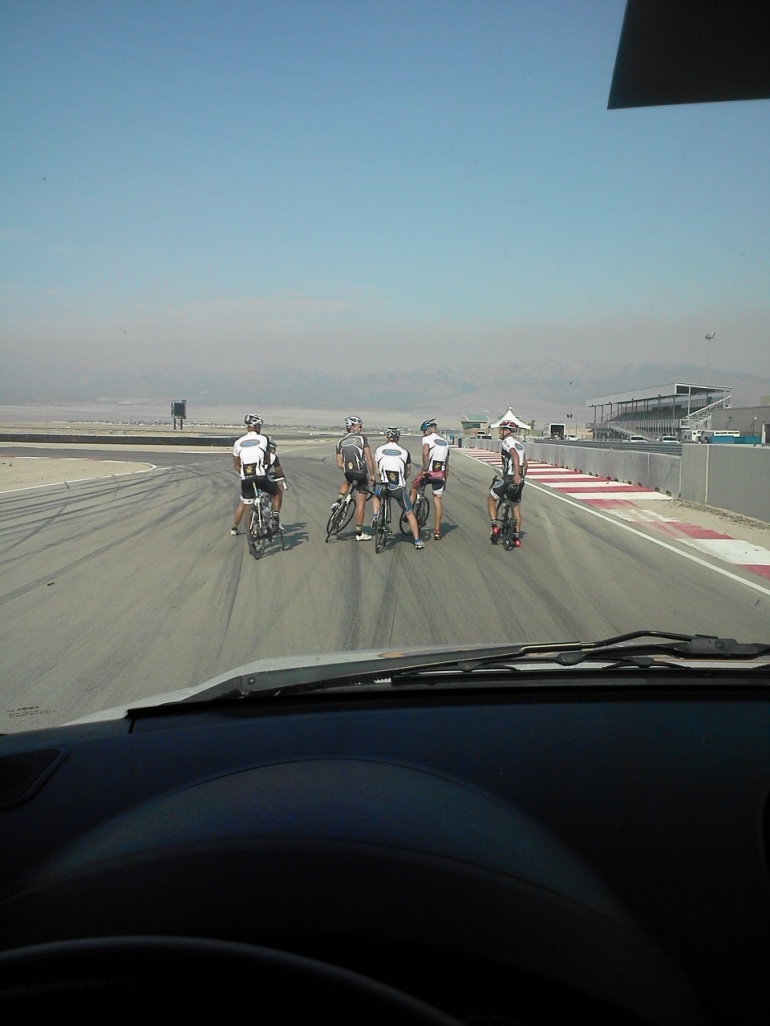 I left the track a little earlier than the athletes, so I could get back to the hotel and get the bikes ready for the next day’s stage.  The guys only did 13.5 miles on the day, so they didn’t need as much attention as they did after a 100-mile day.  I wiped them down with some ProGold ProTowels, checked them over, and put the bikes away for the evening.

Stage 3 was very interesting.  The Tour of Utah’s route utilized a lot of the same roads on this stage as it used on Stage 1, just backwards.  The first climb of the day was heading the opposite direction over North Ogden Divide, then ran the route backwards, to Snowbasin for the third time this tour.  Following that, we descended down to Morgan, UT, and around a reservoir to Hwy 65, and up over a mean little climb called Big Mountain.  It was a pretty big challenge for the guys, and there was some separation in the group, but the view at the top and the descent into Salt Lake City was amazing.  The CTS athletes continued to surprise me, and did a great job staying together.  It made it pretty easy to support them from the vehicle, and take care of them when they needed assistance because of their cohesion as a group.

Except for Stage 1, there were no real mechanicals, flats, or any real issues up to this point, which made me feel pretty confident in the work I was putting into the bikes.  Usually, the third day is when everything starts to get ironed out, as far as systems go.  I was starting to nail down my organization of the support vehicle, seeing how things were working for me on a couple of road race stages, and figuring out the group’s dynamic.  After a few days on the road, you get used to their patterns of natural breaks and rest stops, and beat them to the punch. The key is to be one step ahead of the game, unless you can’t be… then you just remain flexible.